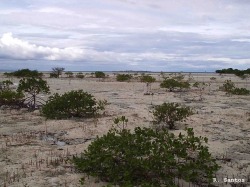 Olango Island is the first wetland of international importance for waterfowl. It is a diverse coastal ecosystem consisting of
extensive coralline sandflats, mangrove forest, seagrass beds, and offshore coral reefs. The island is virtually flat, and it is surrounded by warm seas.

Located five kilometers east of Mactan Island, Olango Island lies between the Bohol Strait to the south and the Camotes Sea to the north. To the east is the Olango Channel while to the west is the Hilutungan Channel. It has seven barangays, one of which is Sta. Rosa, where the island's wharf and parish church is located. The island hosts seven barangays: Baring, Caw-oy, Sabang, Santa Rosa, Talima, Tingo and Tunga-san.

How to Get There

A traveler can get to Olango Island by taking plane from Manila going to Cebu. There are a lot of planes going to Cebu as it has an international airport. From Cebu City, take a jeepney fro Lapu-lapu City. The jeepney terminal near the old White Gold Department Store, in the reclamation area. Upon arrival in Lapu-lapu City, go for the tricycle bound for Dapdap or Angasil. Disembark at the Mar Y Cielo Beach Resort. Take an outrigger boat for Santa Rosa (Olango Island). From Santa Rosa Wharf, take a tricycle going to the end of the Wharf. From there, hire a motorcycle to bring you to the sanctuary. Ask the driver to wait for you as there are no means of transportation in going back to the Wharf. You can even go around the island through the use of motorcycle in about an hour. It is advisable to leave the island by 4 p.m. because the pumpboat going back to Lapu-lapu City is limited and there are no accommodations available in the island. 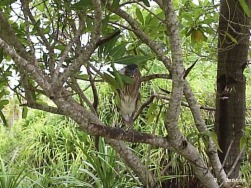 The island is used by millions of shorebirds as a resting place enroute from Siberia and northern Japan to Southeast Asia and Australia. From September to November thousands of shorebirds migrate to Olango and farther south to Australia and New Zealand after breeding in China, Russia and Alaska following the East Asian-Australasian Flyaway. Soon after winter, from March to May, the shorebirds begin their northward migration and thousands of them pass by Olango en route to the breeding areas in the northern hemisphere. All year round then birds are everywhere in the sanctuary, although their numbers can be very lean during the summer months.Among the frequent guests are Chinese egrets, Asian dowitchers, Eastern curlews, Whimbrel, Black-tailed Godwit, Red Knot, Plovers, and Sandpipers among others.

The island's mangroves are most extensive in the Cebu province, and its offshore corals are home to scores of various marine species. 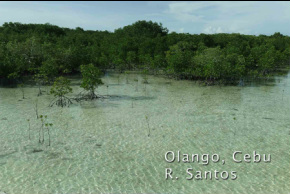 There are no available accommodations.
Admission fee to the sanctuary is 20.00 pesos.
There are no automated teller machines.
There are no restaurants so it is advisable to bring food to the island.
The mode of transportation in the area is limited. Only tricycles and motorcycles ply the barangays. 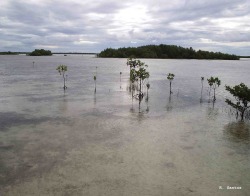 I became interested in going to the island because I saw it on the national television. I said to myself, one day I will go there. And so, I decided that before going to Bohol, i will pass by Cebu. I took the earliest flight out of Manila. When I arrived at the airport, I was assisted by the Department of Tourism personnel to rent a car going to the wharf. In a few minutes, I was already at the wharf. I took a small boat then transferred to a bigger outrigger boat. It was early morning when I arrived in Olango Island. I didn't know how to go around the island because what I got from the internet was very limited information. From there, I opted to ride a tricycle and then from a store, I hired a motorcycle driver to bring me to the sanctuary. From the sanctuary, I was welcomed by a DENR personnel and oriented me with the guidelines in birdwatching. It was lowtide in the sanctuary and so I was able to walk around the mangroves and stayed a while in the viewdeck area to observe birds. As much as I wanted to take pictures of the migratory birds, I was not able to because everytime I walk near the birds, they flew away. Not to mention that my camera was not a powerful one to catch bird movements. I was able to take only one picture of a bird because it was already a resident in the area and it got used to visitors of the island. Then I went around the island to buy a souvenir. I bought a shell that can be hang on the ceiling, it was cheap because I bought it directly to the residents. Before lunch time, I left the place so that I can catch the ferry from Cebu port going to Bohol province. I truly enjoyed and appreciated the place as I saw different kinds of birds and marine species along the shore of the island. I also appreciated the residents warmth to visitors in their area.