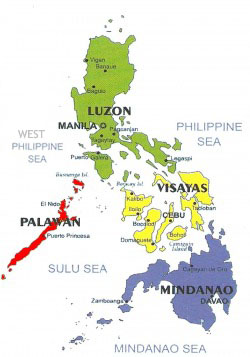 The Philippines is located off the coast of Asia, lying between Taiwan in the north and Borneo in the south.  The western Pacific Ocean and the South China Sea border its eastern and western limits.

Climate: March to May is hot and dry.

June to October is rainy.

November to February is cool.

Environment: The country is rich in biodiversity with around 12,000 plant species, 1100 land vertebrate species and at
least 500 coral species.
Highest Point: Mt. Apo in Mindanao (2,954m)